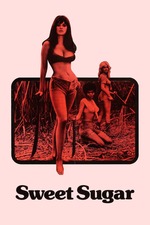 Sugar, a prostitute played by Phyllis Davis (Vega$, Beyond the Valley of the Dolls), is set up by crooked authorities in South America, arrested, and sent with other female inmates to work a two-year sentence at a Costa Rica sugar cane plantation. As she is put to work in the fields in a rather fetching outfit of cutoff shorts and a flimsy top, she quickly makes the acquaintances of Simone, a fellow hooker played by Ella Edwards (Sneakers), Dolores, a young blonde played by Pamela Collins, and Fara, played by Jacqueline Giroux. These women dream of escape, but their efforts are continuously thwarted by the lecherous prison guards and the evil Dr. John, played by Angus Duncan, who has a habit of enlisting them in strange medical experiments.

The 1972 action drama, Sweet Sugar, which was directed by Michel Levesque (Werewolves on Wheels), is one of the many women-in-prison movies that followed in the wake of the Roger Corman production, The Big Bird Cage, from the previous year, and, like many early films in this subgenre, it effectively balances fun-spirited, albeit nonsensical, plot developments with generous helpings of sleaze without going too far overboard with the latter. One particular subplot, involving a goofy prison guard who constantly tries to advise his rookie guard friend on how to score with women, is a constant source of levity, and it keeps the movie afloat even when the story veers into more serious exploitative territory. This is one of those drive-in movies that seems to throw anything and everything against the wall to see what sticks, including a mad scientist, cannibalism, voodoo, gunfights, lesbianism, feral cat attacks, and a few nods to the blaxploitation genre that was flourishing during the same era.

The title character and her friends are the main draw, of course, and it's always amusing how they seem to look lovely, with makeup and all, even after working out in the hot sun on the sugar cane fields all day long. The groovy music soundtrack is for the ages.

Sweet Sugar was one of the many featured movies on the USA Up All Night series, which irreparably corrupted my taste in cinema during the 1990s, and I really enjoyed seeing it in its unedited version tonight at long last.

The Great Owl liked this review