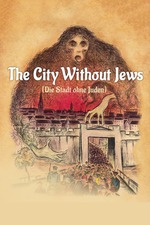 Finally "Die Stadt ohne Juden" can be seen in its restored beauty.
The adaptation of the Hugo Bettauer-novel of the same name, is a supremely naive tale of an unnamed city (that is unmistakably Vienna) that bans all Jews.

Bettauer distanced himself from the film, as certain key aspects were changed. In the novel, the city is Vienna and the Nazi party is called as the anti-semitic force to look out for and of course there are those two endings. Hans Moser who played Rat Bernard, who in the not restored version of the film is in a mental institution, indicating, that everything was a dream, while in the restored version, he still ends in the institution, but only to miss the crucial vote on the "Jewish Law", so the story of the movie happened anyways.

Breslauers film still works as it tells the story in a more universal way, but there are some aspects that make a lot more sense, when you are Austrian (as this reviewer) or know some things about the history of Vienna.

Looking back on the production, I just get sad when I read about what happened to some persons attached to the film.
Author Hugo Bettauer was shot by a Nazi, who was found guilty but received a lot of respect and encouragement and set free after two years in a mental institution.
Screenwriter Ida Jenbach (who adapted the novel with director Hugo Bettauer) who is now almost forgotten, died during the Second World War in a Ghetto in Minsk.

More information on this historic film document can be found in the very interesting exhibition "Die Stadt ohne".