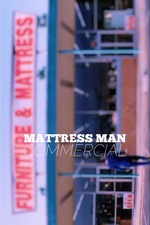 For me, all of PSH's skills are conveyed in this. It's 53 seconds long, an almost precise recreation of a local mattress store commercial, and it only appeared on the 2-disc special edition of Punch-Drunk Love. In it, PSH plays his character in PDL, Dean Trumbell, the owner of a mattress store who also doubles as the leader of a phone sex ring. In this clip, he's recording a commercial on the top of the store's roof, wearing a too-small leather jacket and just barely pretending to strum the guitar he has in hand. He talks about the great deals the store has for queen and king mattress sets. Then, he does an awkward half-jump, half-fall off the roof and intends to land on the pile of mattresses stacked on a car below. He does, but then he does a tumble off the mattresses and lands right on the pavement. His crew rushes over to see if he's okay, and he says he is, although he "fucked up [his] guitar". He then asks if they got it on film, they say they did, and he walks away.

There's no reason PSH needed to do this. Most people would not do it. Falling off a roof and onto a parking lot for a gag feature on the DVD of their movie is not exactly an enticing prospect for many actors. But not only did PSH did it, he sold the hell out of it. He isn't some big-name actor smirking his way through a small favor to a director. He is the Mattress Man, trying to appear hip to the kids who want to buy a mattress, and then literally falling on his face doing so. His physicality, his speech pattern, the way he "strums" that guitar, it's all correct, going off the original clip. You don't find this level of commitment in many movies that are released nowadays. PSH delivered a brilliant, non-showy performance in seven seconds under a minute, by talking about mattresses and falling onto pavement. We may never see something like this again.