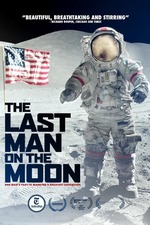 The Last Man on the Moon

The Artifice in Documentaries: One Small Gripe for Man, One Giant Shrug for Mankind

There’s a scene in this movie where the subject, Gene Cernan, arrives at a house in a white SUV, pulls in beside an identical white SUV, is greeted by his daughter, and then the two go over to sit on a swing and have a seemingly candid conversation about astronaut parenting standards. This is the first time we get to see his daughter as a grown woman, and the conversation itself should be hard hitting as an honest depiction of an American hero showing regret for his past mistakes. Instead, all I could think about was how artificial this whole thing is.

Did he really just arrive in his SUV and share a greeting with his daughter, or did he show up earlier with the camera crew so they could set up and then drive back down the road to reenact his arrival? Did this conversation actually come up spontaneously, or did they have to wait thirty minutes to get fitted for microphones and then find the most cinematic location to have this conversation?

"The Last Man on the Moon" is littered with these moments of fake realism, and it really bothered me throughout. Anything that wasn't archival footage felt unnecessarily staged; as if they're trying to hide the fact that these people are obviously aware that they are currently on camera. Maybe it's better to do away with all the talking heads and staged sequences of an astronaut going horseback riding with his old airforce buddy. Maybe the majesty of space, the awe of human ingenuity at its finest, and the tragedy of personal sacrifice in the face of national interests is best captured through the actual images of its time.

If only there was a documentary that didn't sully the historical footage with this bloated fake tripe . . . *looks over at the documentary "Apollo 11" that he hasn't watched yet* . . . wait, why wasn't I watching that?

P.S. Admittedly, I am happy to know more about this interesting individual and the life he led. When you think about all the things he's seen and done, these human experiences that are only for a select few yet have shaped the course of history, it really takes your breath away. Oop, now let's watch him go to a bull riding tournament and then cross cut to stock images of G training to try and force a connection. Sigh.