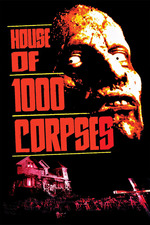 "Shut your mouth. I said, shut your fucking mouth! Listen, you Malibu middle-class Barbie piece of shit, I'm trying to work here! Work?! You ever work?! Yeah, I'll bet you have. Scooping ice cream to your shitheel friends on summer break. I ain't talking about no goddamn white socks with Mickey Mouse on one side and Donald Duck on the other. I ain't reading no funny books, mama. Our bodies come and go, but this blood is forever."
-Otis Driftwood

I like the costume design, hairstyling & make-up for all the characters and how memorable they are, each actor from the Firefly clan does a great performance: I like the psychotic rants from Otis, the crazy childlike persona of Baby, how eccentric grandpa Hugo and mother Firefly are, Captain Spauldings comical dialogue with his co-worker and then later with the police. I like the set design for his Muesem of Monsters and Madmen. I like how Tiny is the nicest Firefly.

I like the trashy feel, direction and cinematography. I like the editing and clips that are included. How different gauges and filters were used for the cutaways. How some of the cutaways were random, like the Sasquatch cutaway or religious fanatic cutaway. The lighting. I like the set design for the house. A lot of clear inspiration from The Texas Chainsaw Massacre and early exploitation horror films - Even has Bill Moseley from The Texas Chainsaw Massacre 2 - I love having a modern film that closely resembles that.

A lot of memorable scenes. When Hugo and Baby put on a show after dinner before capturing their victims, the "Who's Your Daddy" scene, the sacrifice to Dr Satan scene, Red Hot Pussy Liquors scene, the opening scene, and a few others are all very memorable... Love how intense the character Dr Satan is at the ending and the set design for his lair. And how the people are sent down in bunny outfits.

"Shoo, shoo," said the maiden. Hahahahahahaha. "Come, Maiden," said the rabbit. "Sit on my tail and go with me to my rabbit hutch." Hahahaha.
-Baby Firefly