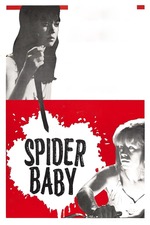 The twins from The Shining are no longer the creepiest movie siblings that I have seen. Enter Spider Baby, a bizarre tale about three siblings with a syndrome which causes them to regress backwards in evolution after puberty.

One of the scariest things to me is a character that appears to be nice and wholesome, but is actually psychotic. The two sisters in this film fit the bill, as they playfully murder people as if it were a fun childhood game. Lon Chaney plays their caretaker who is trying and failing to keep the children's aggressive urges at bay. They actually reference some of Lon Chaney's films at times, which was kind of fun.

Much of the creepiness of the film is provided by Sid Haig, who plays the bald headed mute brother who kills cats and has uncontrollable sexual urges. While the two girls looked normal, Haig looked downright disturbing. He is hunched over and moves about the house via a dumbwaiter. He reminded me of Tod Browning's Freaks, which would make a good double bill with this film.

As sung by Chaney in the opening credits, the tagline for the film is "the maddest story ever told". It's definitely up there.