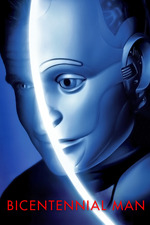 This could maybe end up being the most inspirational movie of the bunch just for how much it focuses on robotics and identity, even if its assertions of humanity and individualism may end up running counter to my own book series.

Anyway, Bicentennial Man is a schmaltzy, overblown, ridiculously silly adventure that is probably the dumbest movie to ever hold the title of being an epic. It's a 200-year journey across a half-dozen generations of one family and the only sentient robot on the planet undergoing the lonely struggle to gain personhood. There's some beauty to be found in this film and Robin Williams plays the part of a growing robot to perfection.

Unfortunately it does feel like the film faced some real problems in the editing room. Despite being 130 minutes long, obscene for a family drama, it feels FAR too rushed. Timeskips will happen after just one or two scenes; we don't get much of a sense of the world or how it progresses because there's just not that much time spent on it; certain characters such as the rebellious sister simply disappear from the movie after a while. The movie needed to have been close to 3 hours long to cover everything it needed to accomplish, and by cutting itself short, it prevents itself from really reaching any greater heights.

I'm sure it was cut to shreds for box office considerations, since a 130-minute film is a lot more appealing than a 175-minute film, but Bicentennial Man was probably a turkey regardless. It's a family film filled with gooey sweetness, but it's also filled with frank discussions of sex and has practically no cheap silliness to keep the kiddies entertained. This movie was a guaranteed bomb and so I wish that it went further out instead of keeping itself more commercially friendly.

I should be giving this a 3-star rating because I think the ending was so easy and morally acceptable that it was outright disappointing, but I don't know man, something about this movie made me feel warm on the inside, like some sort of nostalgia for an age when androids were actually still a consideration, an era where the internet wasn't so prevalent that it would render robotics nearly obsolete. Maybe I'm just a sucker for retrofuturism and a sucker for schmaltz, and this movie has got them both. So for now, 3.5-stars it is.

While this movie was a huge bomb back in the day, I wonder if this kind of story, a massive sci-fi epic, but one with a small cast and no action, would do better in 2020. As long as you keep the retrofuturistic elements alive, you could probably make an amazing 3.5-hour epic (or a miniseries) out of this same storyline. I am probably the only person on Earth asking for this, but I ask nonetheless.