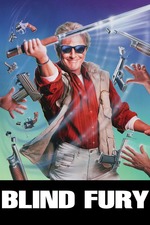 You already had me sold with Rutger Hauer as a badass, silly blind swordsman. You had me extra sold when you got Rutger Hauer to be a blind, homeless Vietnam vet struggling with haunted memories and repressed emotions as he journeys on with a quest that isn't his own. Those two things were already enough to make me kinda want to watch this, even if I wasn't expecting more than late 80s/early 90s schlock.

You already had me sold with those, so boy was I surprised when this movie turned out to be fucking fantastic. A relatively serious plot with a lot of serious elements thrown into a pot with a zany cast and some excellent action setpieces, all finely tuned for the greatest in cheese factor. It's a road movie filled with neon, Drug War mumbo jumbo, random Japanese elements, and a bunch of redneck henchmen shooting everything up. It's everything great about 80s action movies all at once, and done with enough style and pizzazz that it actually works. It actually works!

Every single action scene is expertly crafted for ridiculous humor mixed with legitimate tension and really great sword slicing moments. Rutger Hauer stumbles around gracelessly right up until he gets to take some foes out, wherein he goes full mega-mode and takes out just about everyone around him with a single slice. I'm sure Zatoichi movies are about the same way, but that takes nothing away from this movie here.

How Blind Fury isn't a holy grail for action movie fans I don't even understand. This movie is kind of obscure, and unjustifiably so. Let's give one up for Rutger Hauer and cry about the fact that this never became a long-running franchise that peaked after the second entry and continued to release lackluster sequels up until 2011.