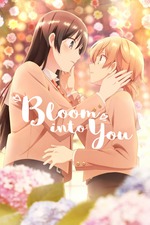 Yagate Kimi ni Naru is very good slice of life, a slow-moving and beautiful picture of high school romance and growing up wrapped into a portrait of wide-ranging LGBT issues. By LGBT issues I mean quite a lot-- lesbians kissing, of course, but also bisexuality, repression/"phases", and asexuality. That last one's the big one.

Protagonist Yuu is rather unique in that she is very much gray in her own sexuality, finding it difficult to feel the same love that her senpai Touko gives onto her. Asexual/aromantic characters are almost entirely unrepresented in fiction, and the fact that Yuu is the central focus here is pretty incredible. It's not a POV we see often in anime, let alone in a show already embroiled in LGBT romance.

And to say that the show is primarily about Yuu and Touko's romantic relationship is a mighty understatement; almost every single bit of the series is dedicated to the two characters discovering and learning to love each other, and in turn learning to love themselves. A lot of the plot beats here are familiar for anyone who's read a shoujo manga; the drama is pretty predictable, with doomed love triangles and sad backstories and school life troubles, but the show is able to move past that on the strength of these two characters.

The show revels in subtlety and visual storytelling. While the animation is alright, the "cinematography" is fantastic, using film techniques like close ups, POV shots, cutaways, interesting camera angles, the kinds of stuff you don't see often in anime, all to show the characters' emotions without actually spelling it out directly. Yuu learning to love Touko is a long, gradual process, and doesn't take form in a specific moment but throughout the series, and never with any dramatic revelation. Just some eyes fluttering, some long stares, and some beautiful glowing scenery. I'd call it a general "softness."

Yeah, that probably sums up the series as a whole. Very soft.

Once again, the anime does nothing revolutionary outside of the typical Shoujo confines-- you've got a lot of internal monologuing, a quirky side cast, some obligatory makeouts and a sex scene that cuts from the actual sex-- but it is a well-refined work and its exploration into asexuality is really nice. The extreme frankness with which Yuu and Touko discuss their feelings (or lack thereof) for each other is also refreshing. So many good moments come from them actually communicating and being open with one another.

Though, I do gotta mention that Touko, mostly in the earlier episodes, is pushy on a level that veers towards breaking consent, and that isn't a nice thing at all. Yuu eventually chews her out, but there are a couple uncomfortable moments before the two finally settle on themselves, and I don't think the issue was addressed as firmly as it needed to be because pushiness and dubious consent is a sadly common occurrence in LGBT anime of all genres. Every romantic moment in the second half of the show is pretty firmly consensual though, in a nice way.

My biggest problem with the show? It doesn't friggin' end! The last episode cuts off with something of a character moment between Yuu and Touko, one that essentially solidifies everything that came before it, but there is no climax and no resolution, as if we are just supposed to wait for the second season now. Which is real lame, guys. Give us a real season finale even if the continuation is inevitable. Because sometimes inevitable continuations don't actually end up working out that way... (Gakkou Gurashi RIP) I will genuinely lower this to a 5 if there isn't a second season in the end, because of how much this show leaves things dangling. Don't do that.

Don't watch this show if you're looking for a bunch of fanservicey heavy petting and any super dramatic moments. Because you ain't gonna get that with Yagate Kimi ni Naru. Watch this for some really good characters, really good discussions of LGBT issues, and some really doki doki romantic moments.

Everything Is Terrible! The Movie