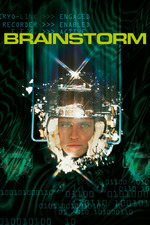 A wonderful, pretty, and super engrossing movie... for two acts. Once the really thrillery stuff starts piling in, the movie starts to get weirdly boring and its resolution is far less exciting than the promise it's given. There are some extremely trippy visuals, especially in that ll-fated third act, but overall I'm a little bit mixed on the package.

If directed by Spielberg or Cameron or Dante this would be hailed as an all-time classic. Instead it's a really interesting but flawed sci-fi movie that's far more remembered for its one major production issue than for the actual film itself. Sad, really.