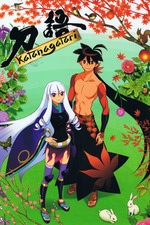 Finally, the cross-genre blend of Jidaigeki and Hard-Boiled Mystery the world has been clamoring for.

Oh, well apparently I have to write a longer review to actually submit it so I can't leave it on just that note, but Katanagatari is exactly what you're expecting when you hear the phrase "Nisioisin does a swordfighting series."

Every character, all the way down to the most minute, single-scene appearances, are fleshed out and eccentric in their own ways, with backstories and special powers and character arcs to keep you thinking about them long after they (for the most part) are torn to pieces. Half the series is just characters in conversation, and a few of them exist mainly to break the fourth wall or to deliver critical exposition. It's a giant chess game between protagonist Togame and antagonist Princess Hitei, and most of the plot is obscured by the fact that these masterminds are withholding all the information from the cast (and from us, of course).

The story, a journey to collect twelve swords with twelve strange superpowers, really is just a mystery novel every episode; the goal is absolutely not in delivering a story that works on suspense and twists and turns, and instead gives us puzzles to solve-- how does each sword work? How the heck's Shichika going to defeat his opponent this time? Because of the amazing cast of characters, this formula works really well and compares favorably to similar defeat-a-bunch-of-eccentric-villains stories (e.g. Scott Pilgrim, Ninja Scroll).

Katanagatari is primarily a comedy, working on silly circumstances, weird punchlines, actively making fun of the viewer (you'll know the episode when you see it)... but once again, the cast makes the emotional moments really work. Almost every character has their own arc, their own development, their own tragedies. Their paths collide, people die, and the story moves on, but it's continuously a sad, lonely journey for our two protagonists even as the story keeps the tone light. Balancing the jokes with the legitimate emotions is a tough one, and just like with the Monogatari Series, Nisoisin's writing pulls it off. Somehow.

Art style is lovely, a mix of cute and cool that plays to the mix of drama and comedy that I just talked about. The animation is iffy in places, no more than any other TV anime, but kinda noticeable here when every episode is a full fifty minutes each. The fight scenes, luckily, are all great. But you'll definitely notice some cheap animation techniques, a lot of still frames where a bigger budget would have been a lot more dynamic.

Also, some of the episodes, especially later on, really didn't need that hour-long episode time and you really felt that they could have mashed a couple of the stories together without losing anything. Still, nothing was egregious and there were not noticeably poor episodes out of the bunch.

I wouldn't say Katanagatari is a masterpiece of television or anything, but it sure got pretty close to being a true epic, and one that could only be done in the world of Japanese animation. Watch this if you're into good television.