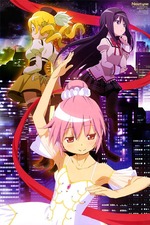 Yeah, this concept movie was pretty cool and all. It's basically just a trailer for Madoka Magica 4: We Don't Know Yet, but it had a lot of really cool visuals and some cryptic dialogue from all our favorite characters.

If you're going in here to figure out what the plot of the next Madoka movie and/or TV series will be, you probably won't have much luck. But it definitely does its job at making you excited for whatever the hell the next entry will be.

Apparently I can't write a short review for a pretty short video, so I have to figure out how to fill the space with some non-spoiler speculation:

-Mami Tomoe has been a not-that-influential character within the previous entries in the series. Compared to the other four magical girls, she's the least important one. However, her somewhat-brief moment of spotlight in The Rebellion was absolutely fantastic and one of the better scenes in recent anime history. The concept movie seems to me like it's hinting that Mami will have a much bigger role to play, possibly literally.

-I'm assuming that a great deal of this won't bear any resemblance to the final product, but the ballet dancing Madoka was great imagery and I really hope they stick with that theme at least in part. Though not sure if they should go full-on Swan Lake Loose Adaptation like the series did with Faust and The Rebellion did with Paradise Lost.

So, yeah. It's a cool video, and you should watch it if you want a tantalizing glimpse of what Madoka 4 may or may not actually be like.