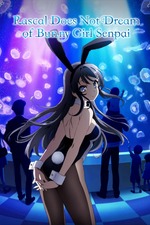 Rascal Does Not Dream of Bunny Girl Senpai

Rascal Does Not Dream of Bunny Girl Senpai 2018 ★½

Butayarou: It's Bakemonogatari, but instead of mental illness being represented by folklore or magical entities, mental illnesses here manifest themselves as sci-fi weirdness known as "Adolescent Syndrome." This includes things like time loops, retroactive erasure from reality, characters splitting into two... Some really interesting concepts that can work really well to explore the concepts of identity and self.

This is what happens when you rip off a successful work, but fail to capture the essence of what actually succeeded the first time around. It results in some of the most banal, hackneyed trash I've seen in an anime in a long time, all glossed up like it's destined to be the next big hit when in reality it's got about zero appealing factors.

First off, we gotta address the cast. By that I mean, they just don't exist beyond two-sentence stock summaries, most of them lifted directly from Bakemonogatari. The protagonist is sardonic and cynical, but also goes out of his way to protect everyone. Check. The main girl is a tortured and reserved tsundere who opens up quickly after her initial problem is fixed. Check. There's the nerdy glasses girl who seems to know literally everything, but has a secret romance-driven pain deep in her heart that manifests by splitting her personality in two. Check. There's the cute kouhai who is driven to great jealousy by the protagonist's relationship. The only "new" characters is the little sister, who is a stock personality herself, but not one stolen from a Nisioisin book, and an idol who really doesn't have much presence.

Each of these main characters has their own character arc problems that need to be solved, and of course they always involve some supernatural occurrences (except for the sister's, but I won't go into that one because it's just too poorly done). BIG PROBLEM THOUGH: the arcs aren't interesting! The characters aren't interesting! It's all paint-by-numbers high school life!

We have such good sci-fi elements that get only the most cursory use, never delving anywhere past the surface level. There's a body swap story arc where two characters are forced to assume each other's lives, but it leads to one emotional outburst and mainly some hijinks. There's characters stuck in a time loop, but to only one end, and that is some wacky dating hijinks. A character accidentally creates a copy of herself, and so now two of herself are wandering around the world living as independent beings. But rather than exploring that concept of identity, it's just treated like a hurdle for the writers to get past; they don't want to deal with the sci-fi parts, they just want to get back to the kissing (of which there is none, spoiler alert).

It took me a while to realize what makes Butayarou a failure while ripping off from only the most successful anime of the past decade-- the characters aren't given enough depth beyond their stereotypes, but why? I know why. The protagonist, the main dude, takes away all the spotlight. The female characters have zero agency in their own story arcs, because the protagonist solves all their problems for them. In Bakemonogatari and its sequels, Araragi does his best to help his friends, but in the end, the characters only fix their problems of their own accord; the only character who was saved entirely by Araragi turned out much worse later down the line as a result.

Here, the protagonist does all the work. The first girl is saved because the main guy learns to overcome his own feelings of awkwardness and put himself out there. The second girl is saved after the protagonist forces her to confess her inadequacies. The third girl is saved by the protagonist arranging everything to force her to see herself clearly. And so on. No agency means it's not interesting, and we can't actually explore a character's identity if their arcs have been snuffed out by a poor narrator.

The very last story arc is so bad that the big giant emotional plot twist was so obvious, so hackneyed, that I didn't see it coming. This was not an uncommon occurence in Butayarou. Every single time that there was something interesting the story could do, it instead resolved itself to have some sort of ridiculous plot twist to push itself back towards the normal Light Novel Quasi-Harem High School Drama status quo, and nothing ever actually changed but some of the characters seem to like each other a bit better now.

Stay away. Just rewatch Bakemonogatari and be done with it.