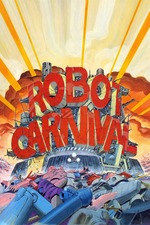 Like any anthology film, it's gonna be a mixed bag, but Robot Carnival is pretty consistent in quality... mostly in not being immensely impressive throughout any of its seven main segments. "Cloud" is really nice as an interlude and "A Tale of Two Robots" steals the show, but the rest are pretty forgettable unfortunately, though they're still pretty neat. The only one I actively hated was the ugly, unengaging "Presence", which is not coincidentally the one with the most dialogue by far (most of these segments have no dialogue at all).

Also, the opening and ending segments are amazing and need to be seen to be believed. Oh man what a world of animation it was back in Economic Bubble-era Japan.