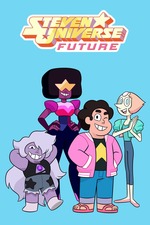 This miniseries, at about 230 minutes long across 20 mini-episodes, is poorly paced to say the least, feeling like it either needed to be another sequel movie (ala la the actual sequel movie), or needed to be a full season of its own, because the self-contained episodes are often too jam-packed with content and characters while also feeling like practically nothing happens and Steven's character arc treads in the mud for most of the runtime. Few of the characters feel like they are given a proper send-off, in part because the very fact this exists is the most glaring example postscript cinema out there.

But it's still Steven Universe. It's a better superhero deconstruction than Batman v. Superman and it's a better ensemble adventure than any Avengers movie. The story plays to its strengths when it's about delving into serious emotional themes while also being silly and fun, and stumbles when it doesn't allow itself to breathe due to drama or action. Luckily, it doesn't stumble much, and the second half of the miniseries is some really gripping stuff.

This is the worst part of Steven Universe by a long shot, but in the end it's a bold experiment in making a story that is the epilogue to a series that already had an epilogue, and it's an admirable effort. For some reason I suspect that there'll be yet another continuation in three or four years as the streaming wars heat up and IPs are lobbed onto platforms at a constant churn rate, but if this is the actual final end, then I'm perfectly OK with that.