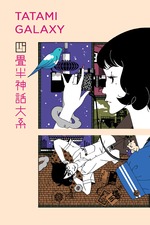 Best of the best. Makes you believe in animation as the best medium for storytelling. Makes you laugh and feel pits of despair simultaneously. Makes you intimately familiar with a cast of characters, so eccentric and wacky and yet so developed you could guess their favorite flavor of ice cream.

I was already deeply in love with Masaaki Yuasa and Tomihiko Morimi's other collaboration, "Night is Short, Walk on Girl", which in the past year has catapulted itself into becoming one of my all-time favorite films. Tatami Galaxy (or 4.5 Tatami Mythological Chronicles) is not quite as magnificent as that movie, but it's pretty darn close. This thing's as close to perfection as a TV anime is going to get, I imagine.

The entire thing follows this formula of a self-defeating, cynical college student going through alternate timelines, picking different clubs and trying to achieve great success, but continuously failing. Through this you get to see a dozen different angles of the same cast, meeting and interacting and falling into the same storylines. Like any formula-based series, though, the anime is best when it suddenly diverges from the expected and goes its own way, subverting the formulas to show you something new that you hadn't considered. When Tatami Galaxy does this, it does it with a narrative skill I don't think I've ever seen in another story before. Like, geez.

This is the only TV show I have ever watched in one sitting; I just never have the patience to sit through a bunch of episodes in a row... except for with Tatami Galaxy. Holy crap is this show good.