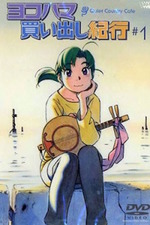 From the director of the criminally underrated coming-of-age nostalgia piece Ocean Waves comes a full-on animated tone poem about a young woman living a quiet life in a quasi-post-apocalypse.

To say that Quiet Country Cafe is understated would be itself an understatement. The dialogue is sparse, the story can be summarized in two sentences, and the worldbuilding is so vague that the sci-fi elements could be completely missed if not for one specific scene. It's all about the mood, and it works marvelously at evoking that tranquil feeling, warm yet tinged with an inner core of sadness.

Exploring the world, hearing the wonderful soundtrack play out, watching protagonist Alpha see new things and figure out what she wants with her life... it's nothing new or revelatory, but it still left lingering feelings of-- something-- inside me long after the credits rolled (with a lovely ending theme song too).

Unfortunately, the entire production is marred by the major factor that the animation budget is just too small, and the story is cut a little bit short for what it seemed to be aiming for. It's a two-episode OVA, so even with the ending theme songs added in, it's barely seventy minutes in total, just over the edge to be a feature film. It felt like it really wanted to go further, and I imagine there is probably a manga version of this story that goes on much further anyway. I didn't want it to end! And, sadly, because of the budgetary limitations, a lot of the beauty isn't that well-captured; the animation just isn't good enough to compensate for the scope.

Also, it's mostly in the first half of the first episode, but there's a lot of creepy pervy camera angles and pans that made me uncomfortable; they were completely out of place and really detracted from the tone poem feeling of the rest of the movie. Please don't do this, animation directors.

If you like quiet, country, and coffee, look no further than this movie here. It's short and beautiful even if it doesn't reach the fullest of its potential.

Honestly, I'd like to see this remade somehow, either in a feature film adaptation or a live-action adaptation from Korea/Taiwan or from an indie director in the U.S., or maybe even a video game? It's definitely the kind of story that would translate very well to other mediums and other styles of storytelling.