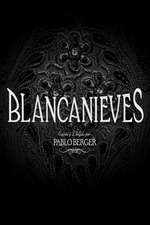 The reason this works while The Artist does not is subject matter. Being set in the world of silent films, and transitioning to sound at the end as the lead character does, explicitly positions The Artist as an homage to silent movies. Thus, when it fails to correctly use silent film grammar and hammers us with ahistorical references (the dog and the adventure serials are products of the 30s, not the silent era), the movie just feels weird and unfocused (similarly with the use of the Vertigo score: it doesn't make any sense: it's both period inappropriate and thematically irrelevant, why should we be thinking about Vertigo in that scene?). The whole experience seems condescending towards silent film ("Oh isn't that cute: they can't talk!").

Blancanieves on the other hand, never implies a position toward silent film at all. It doesn't ape silent film grammar, but rather than seem like a failure, this seems obviously intentional. Rather than making an homage to an antiquated film style full of references that don't have anything to do with that style, Pablo Berger simply made a movie with intertitles and without sound. Like Guy Maddin's period-style work, he simply adapts modern techniques (POV shots, cutting between multiple setups within a single scene and lots of handheld camera work) to another convention. It isn't an homage, it's an updating. It's just what silent films would look like if they were made with modern camera technology.

And it works pretty well for the story he's telling, a (somewhat) modern version of Snow White, set in 1920s bullfighting Spain. As a fairy tale that feeds on primal fears and desires, an approach that favors the visual over the verbal is perfect. Images seem to affect us at a more basic level than words, they stick in our heads and conjure memories in ways that words do not. Probably because we learn to see before we learn to talk.

A few months ago, when I saw Paul Fejos's Lonesome, a film made on the cusp of the introduction of sound, totally silent except for three awkwardly inserted dialogue scenes, I mentioned that while those scenes are terrible, I'm glad they're there nonetheless because in their irrelevance they demonstrate just how unnecessary sound is to filmmaking. Blancanieves seems to agree with me, while The Artist can't wait to grow up into talking pictures.