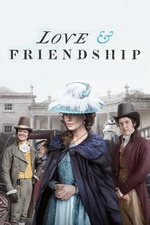 I’ll have more on this in a few days, I want to see it again. But as of right now, it’s easily the best film of 2016. Whit Stillman adapting Jane Austen works better than I imagined, seamlessly merging his comic rhythms into the Regency dialogue and story structure of her epistolary novella Lady Susan. The story is more acerbic than the Austen we know from BBC adaptations, which tend to emphasize the romantic melodrama of the novels over the stinging dialogue, the distance between what people in a highly regimented and ritualized society say and what they feel. The source material is unusual for Austen in this sense, privileging wit and style over romance or basic morality, but it’s perfectly in keeping with the spirit of The Last Days of Disco, the last film to pair Chloë Savigny and Kate Beckinsale. Stillman fleshes out the narrative around the edges (especially the character played by Tom Bennett, who steals the movie), but the sensibility is all Austen. It’s the film that proves that Austen is indeed the English language’s link between Shakespeare and Oscar Wilde, as Stillman is the heir to Ernst Lubistch and Ben Hecht.

A Scandal in Paris