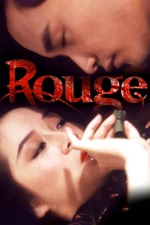 In my first Summer of Sammo reviews of Hong Kong New Wave films I've noted that the characters, young people in Hong Kong, are haunted by the largely unexpressed past, the geographic dislocations and family break-ups of World War II and civil war in Days of Being Wild and the Cultural Revolution in and Stanley Kwan's Full Moon in New York. That haunting is both expressed and literalized in Kwan's Rouge, as Anita Mui's spectral courtesan shows up in 1987 Hong Kong looking for the ghost of her lover Leslie Cheung and enlisting a modern couple in her search.

As the story alternates between past and present (it begins in a 1930s brothel, a setting familiar from Hou Hsiao-hsien's slightly earlier-set Flowers of Shanghai), the flashbacks take on a meta-cinematic element, with the modern couple commenting on the story (courtesan and wealthy man fall in love, his family tries to keep them apart, they commit a double suicide) and attempting to relate it to their own lives ("Would you commit suicide for me?" "No. Would you for me?" "No."). This meta-ness is compounded by Leslie's escape from his family business into the world of acting (Chinese Opera, naturally) and the film's conclusion on a wuxia film set. We experience the past cinematically, a beautiful surface of romantic idealization, but that only serves to mask the pain and misery and betrayal of real life tragedy (paradoxically revealed in the film we, and the modern couple, are watching). The dazzling golds and red of the ornate brothel shame the dull blue gray of the city at night, Hong Kong in the 80s is far less romantic than its imagined past. But far safer.

Sons of the Desert