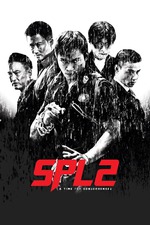 One aspect of 2010s Hong Kong cinema that I'm particularly enjoying is the repeated and obsessive destruction and piecemeal deconstruction of Louis Koo's body. That side of him as a performer was always there (see for example Love for All Seasons or Throwdown), but the Overheard series really kicked his disintegration into high gear. Here, his lifelong organic failures drive the demented scheme of the plot, drawing together the various characters in a web of (meta)physical connections.

Also, why did it take so long to get Tony Jaa in a Hong Kong film? He has more lines here than in all the Thai films I've seen him in put together. He can actually act, more or less.