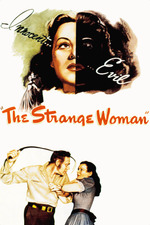 Apparently a variation on Baby Face or Leave Her to Heaven, with Hedy Lamarr as Jenny Hager, the sexy lady manipulating weak-willed men (first Louis Hayward, who looks like a gooey Henry Fonda, then George Sanders, lumberjack) to further her rise in society. She's the leading figure of Christian charity and temperance in 1840s Bangor, a woman who seduces both her stepson and her best friend's boyfriend. But Lamarr and Edgar G. Ulmer unexpectedly complicate the character, giving her an awareness of her own psychosis, with sometime flashes of guilt and Second Great Awakening self-loathing, as if her adopted persona is eating away at her gorgeous malevolence. She could have been a pirate.

All the night through, through the noise and to-do
You wonder who is that person that lives up there?
And you see me stepping out in the morning
Looking nice with a ribbon in my hair

Syndromes and a Century