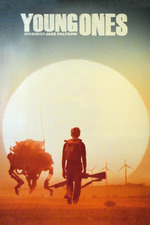 Loved the world and I loved the way the world was shot. It looks great and there are plenty of interesting shots throughout the film. Everything with Michael Shannon was fantastic but I wasn't really a fan of Elle Fanning. I don't usually like Hoult or McPhee, so that was a tough battle for the film to win, but I did eventually start to appreciate their performances and characters. I like the slight tweaking of Hoult and where they went with him.

The music was great and all in all it just seems really unique with plenty of visuals that I had never seen before. The scenes with the mother were amazing, for one thing. And the guns sound great, which is always a win.