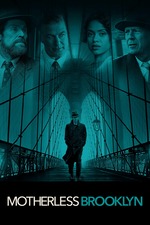 my TIFF19 review for The Film Stage:

Few films come out in any given year with creative choices as baffling as the ones made by Edward Norton’s Motherless Brooklyn. The story goes that when the novel came out in 1999 Norton was instantly struck by Jonathan Lethem’s acclaimed gumshoe neo-noir about a private detective suffering with Tourette Syndrome and began developing the project by as early as 2002. This was a huge period for Norton, having only just burst onto the scene in 1996 starring in Primal Fear (his very first movie, which secured him a Best Supporting Actor nomination), The People Vs. Larry Flynt and a Woody Allen film all in the same year. By 2002 he had made his mark, stacking up on top those titles: David Fincher’s Fight Club, American History X (this time a Best Actor Oscar nomination), playing Hannibal detective Will Graham in Red Dragon, directing his first movie and accomplishing what was surely his very finest performance in Spike Lee’s devastating and impassioned 25th Hour.

For a multitude of reasons however the project remained dormant–the exact sequence of events is still unclear–but now, in 2019, his sophomore writing-directing effort and decades-spanning passion project is finally here and like most narcissistic misfires (what was it his character in Birdman said to Michael Keaton? “Writing, directing and starring in your own adaptation? That’s ambitious.”) it is nothing short of execrable. Watching the film, it’s actually kind of unclear what it is that drew Norton to the material in the first place. Lethem’s book, of course, speaks for itself–an intimate character study surrounding Lionel (Norton), a disabled orphan investigating the murder of his mentor Frank Minna (played by Bruce Willis in the film, clearly taking the role because it appears to have taken one day of shooting) who taught him how to channel that disability into something more. Lethem’s command of wordplay and procedural sense of Lionel’s condition reveals a minute interest in the way the mind processes words, and why, when, and how we choose to reveal our own entangled messes of internal thoughts and feelings.

Norton doesn’t try to render any of this formally. As an actor he mostly uses Lionel’s Tourette’s as an opportunity to deliver another tic-laden performance like the one he received his first Oscar nomination for in Primal Fear (in that film he plays two halves of one psyche, one a tough-talking bruiser and the other a stuttering choir boy), and as a writer-director he applies it mostly out of narrative convenience; it’s either being used as a source of blunt conflict or as a vague stand-in for OCD when he needs Lionel to be smart. It’s an odd choice since Lethem always avoided using Lionel’s condition as any sort of power or ability, but rather an affliction on an already smart guy who people underestimated because he appears strange.

However, beyond Norton’s acting–which isn’t inherently wrong for the book/role; there is something about his boyish features having aged lines on them now that feels genuinely right for Lethem’s detective–his every instinct as a writer and director is completely off. Where Letham’s novel doled out its mystery intimately and on a small scale–again, mostly focusing on the emotional reality of confused orphans dealing with loss and the reality that maybe someone they loved and respected was just another low-level mob lackey–Norton has gone big and melodramatic in ways that are all wrong. Other than the opening scene which basically plays out the opening chapter of the book beat-for-beat, Norton has written an entirely different plot and set of characters for the remaining two hours and twenty minutes.

Again, not inherently an issue, as adaptations make changes all the time and they’re frequently necessary. The issue here is the why. Norton has most notably replaced a farcically small mystery involving mobsters and Japanese capitalists with a grand, sweeping conspiracy that goes all the way to top of the New York mayor’s office. He’s moved the book’s 1999 period to the 1950s depression so that he can graft an “important” social issues backdrop to it, including racial inequality and housing discrimination from a notoriously corrupt and racist New York real estate developer (played by, I kid you not, Alec Baldwin). All of these are inventions of Norton’s, who seems to have so little confidence in the story and character he’s playing that he needs Lionel to be a passive witness to historical injustice just to get us to feel something. The Trump allusions are especially dire.

All of these changes come off as deeply cynical and seemingly designed to manipulate, feign significance and deflect criticism from his glossy, Lifetime noir which is so aesthetically garish it frequently borders on parody. Dick Pope does his best behind the camera but there’s only so much of Norton doing 50s gumshoe narration in a funny hat one can take, and almost every performance around him is just as much of a misfire; not even reliable greats like Willem Dafoe or Michael Kenneth Williams can make his writing appear like anything more than going through the motions of increasingly desperate storytelling gestures.

By the time we reach Norton’s tired, entirely predictable climax it’s hard to figure out the point of all this. The movie has felt like it’s over three hours long by then and Norton has mostly used it as an excuse to do a useless, over-technical performance to the sounds of jazzy strings, horns, and piano melodies and exactly one brand-new Thom Yorke song for some reason. The only gesture Norton appears to make by the end is a naively optimistic call to take this “great country” back from the corrupt; a bafflingly broad, vague, and unearned sentiment that really does feel like Norton has scrapped any interior emotionality of the source material so that instead he can play dress up and disingenuously weaponize real social and political struggles in this overlong, turgid mess.