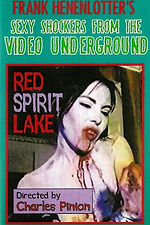 this was my first experience with SOV horror so i needed a 2nd viewing to really get on its wavelength (or “subtle energy field”) but this is full-blown psychotic surrealism. carving out a bizarre space between dreamy, lo-fi stylization and a transgressive, schizophrenic snuff film atmosphere, in just over 60m this features some sort of gangster conspiracy, an ancient coven of sexually abused spirits, alien abductions, a dude burning to a crisp in a sauna, penis mutilation / dismemberment, a touch of satanism and last but not least one of those spirits eventually getting vengeance on a rapist gangster by anal-fisting him to death. can definitely say that i've seen nothing else like it.

full discussion on episode 65 of my podcast Sleazoids.