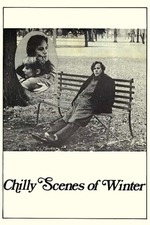 Maybe it's because I watched the two films so close together, but Micklin Silver's movie would be an appropriate chaser to Mazursky's BLUME IN LOVE. Again we've got a protagonist wallowing in self-torment and slowly edging towards dangerous obsession with the woman who left him and is now living with another man, with intentionally off-tone quirky comedic bits tossed in to somewhat dilute the rising feeling of uncomfortableness we feel trying to sympathize with this guy. In this case of course the story is told by a female writer-director (based on Ann Beattie's book) and every obnoxious, needy, delusional aspect of the male lead's personality is unmistakable, making it pretty clear fairly early that whatever happens the audience shouldn't be rooting for him. When a frustrated John Heard threatens to sexually assault Mary Beth Hurt in the climax, it's a heart-stopping moment, with one line doing everything the confrontation in BLUME IN LOVE does except for ruining the entire movie. Like Susan Anspach in BLUME, Hurt's character has issues of her own but they're independent of the men in her life: she just seems to be generally unhappy and unable to figure out the right direction in which to steer her own life. A different perspective on a similar premise from two films released on opposite ends of the decade.

Interesting also that this film came out a year after REMEMBER MY NAME, in which Alan Rudolph decided to portray Geraldine Chaplin's obsessed former lover with the gloss of icy old Hollywood glamour: aesthetically, it's possible to love her no matter how many horrible things she does pursuing the object of her desire. A happy marriage of the two movies might be YOUNG ADULT, and might possibly be the reason Reitman added Mary Beth Hurt to the cast of that one.