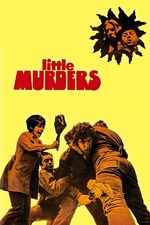 Wow...uh, hm. First time watch for this one. It's a singularly strange film, adapted by Jules Feiffer from what I take to be his singularly strange play. It's set in late 60's/early 70's New York, and the comedic tone is very much like an angry man shouting at nobody in particular on any corner of lower E 13th Street around that time. The story deals with the "little murders" that conspire to break the spirit of decent people every day, and culminates in actual murders when things apparently become so bleak that all the characters have no choice but to go insane.

The cast, many crossing over from the play, are top-to-bottom great. Elliott Gould is hilariously sad as Alfred Chamberlain, a photographer whose theme is "shit" who allows random people to beat him up because "it doesn't hurt" and they eventually get tired and go away. Marcia Rodd's Patsy Newquist takes on Alfred as her personal project, even though her intent to make him feel things is doomed from the start. Her family is played by Vincent Gardenia (the one actor who could be accused of going over-the-top, although he commits to it and is also devastating in his more quiet moments), Elizabeth Wilson (coincidentally caught her in THE ADDAMS FAMILY the day before, she's a funny and gifted actor) and Jon Korkes, a stand-out as the obnoxious younger brother. Lou Jacobi, Donald Sutherland and director Alan Arkin, despite being given character names, are billed as "The Judge," "The Reverend" and "The Detective"; each appears in a single scene to give very memorable and moving monologues. Finally, Doris Roberts and John Randolph appear as Gould's parents in a scene unique to the film.

I'm not sure that the anger of the movie is ever super cohesive or clearly directed, but it's still very powerful. Scenes are both funny and chilling at the same time. This is a film that could only have been made when it was made; the presence of Gardenia is interesting, since it's as much about existential frustration in a crime-ridden New York as DEATH WISH from a few years later. Really glad to have seen this film, even though I'm not sure what to do with it. Apparently Feiffer was disappointed in how Arkin handled the material...I really don't know what else could have been done.