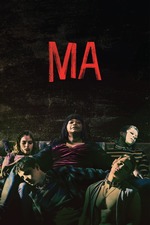 On what factors do you base a review for a movie like Ma? Do you consider its originality? Do you regard how effective the performances are? Do you focus on how much fun it is?

I myself, knowing full well what I was getting myself into (being the Blumhouse fan that I am), choose to go mostly off of the the latter two. I can't deny that this movie is a loony hoot that elicited a few laughs, some cringing, and even some gasps from me.

It's certainly a well-tread concept and yet, largely due to the committed performance at its center, its big bad feels surprisingly fresh. Octavia Spencer clearly had the time of her life playing the wicked Sue Ann and the film is leagues better than it should be for it. She's the reason to check out this otherwise pedestrian dumb-kids-meet-opportunistic-psycho tale.

Frustratingly, Ma never quite reaches the potential its wacky premise promises (and, worse yet, this is yet another example of a film whose plot is almost completely revealed in its trailers). However, it's never boring and even seems to have some interesting ideas on its mind.

My only wish is that we got more of the campy off-the-wall mayhem that rears its head far too late into the film. As it stands though, Ma is yet another diverting outing from the House of Blum. In fact, if the stars aligned, I wouldn't be opposed to see Spencer take up the mantle once more. She does after all, know how to throw one hell of a party.