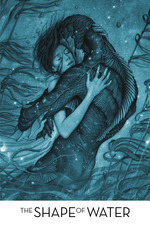 9/10
I've been really excited to see this movie for a long time. Over the first hour, I became doubtful that it would actually feel like Best Picture material. I thought the aesthetic, while interesting, was over-the-top. I didn't find any of the characters to be very interesting, and I thought the acting wasn't particularly impressive. However, as the second half began, it became clearer and clearer what Guillermo del Toro was doing with this movie and the kind of depth that it had to it. And, by the end, I had become really invested in these characters and this world. And that climax was awesome and brilliant. Overall, it is a charming, interesting, well-crafted, and sometimes beautiful film that, while not deserving Best Picture in my eyes, is certainly one of the best of last year.