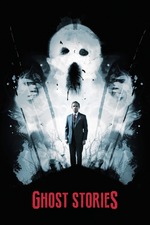 A well written, finely crafted British horror film which is genuinely creepy. It feels like such a long time since we've had a film like this. I think any horror enthusiast who grew up on 70's/80's horror will enjoy it.

There are a few splashes of dark humour here and there and the casting is superb. Paul Whitehouse was a particularly inspired piece of casting. He is such a talented character actor. I would love to see more of him.

The film uses some expert cinematography and lighting to 'trick' you into seeing things. At one point I was freaked out by what turned out to be car seat. It is atmospherically creaky and rusty. Jump scares are kept to a minimum and they are fairly effective. It doesn't fall into the trap of becoming an overly loud, obnoxious 'Conjuring/Insidious/IT' style horror film.

It almost felt like a feature length episode of Inside No. 9 at times and it was co-written by Jeremy Dyson who worked on League of Gentlemen. It's relieving to finally see a properly spooky film in the cinema after what feels like a long time.