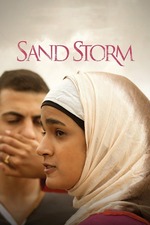 One of the drawbacks of seeing so many films at a Film Festival is there's a risk of exhaustion and of films blending into a homogeneous mess. But on the other side of the coin, you can also go into a film knowing nothing about it and be utterly surprised and delighted.

So it was today with Sand Storm, a wonderful film which deals with its complex issues in an intelligent and enlightening manner. It contains unheralded actors giving touching and devastatingly good performances and all brought together with magical directorial flair by Elite Zexer. An outstanding film, which opens up a world so little seen by Western eyes.