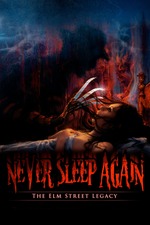 A glorified DVD extra that digs into all eight of the original Robert Englund "Elm Street" movies. But boy how it digs... Each movie gets about a half hour of discussion with its principal cast, screenwriters, directors, and producers. Yes, this is a four hour documentary about "Elm Street." And while I can't imagine anyone who hasn't seen all (or at least most) of the films would enjoy it that much, for those who have, this is a treasure trove of trivia and behind the scenes history. There's plenty of effects test footage and deleted scenes and concept art... It's almost like a mini-film school. And it's a labor of love, for sure. I especially liked the stop-motion animation Freddy that pops up between each segment. For fans of movies and these movies in particular, a must-watch.