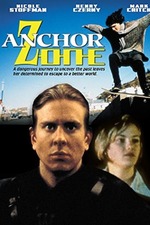 This is not only the largest budgeted Newfoundland film ever, but simply one of the greatest science fiction films of the 1990s.  What ‘Anchor Zone’ is able to accomplish on such a relatively conservative budget is nothing short of astounding.  An absolutely fascinating piece of Canuxploitation history, and perhaps the highest quality Canuxploitation film.  With a larger budget and/or a wider release, the masses would be heralding this shimmering, highly inventive gem for the cult classic that it is.  This is the sort of outsider SciFi film that true cinephiles dream of discovering.

‘Anchor Zone’ was to be the feature film that would place Newfoundland on the map as not only a desirable shooting location for bigger budget pictures, but as a viable cinematic force in it’s own right.   But alas, it was not meant to be.  Thankfully, we got ‘Anchor Zone’ out of it.

Here is a brilliant retrospective piece on the storied production of the film:  thescope.ca/onscreen/a-tale-of-future-past-a-short-oral-history-of-anchor-zone