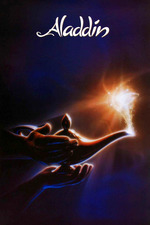 “It’s not what’s outside that counts but what’s on the inside.. the diamond in the rough”

Aladdin is definitely a diamond, but one that’s not necessarily in the rough. It’s more like it’s forcibly wedged between two other diamonds. Aladdin was released between the years of Beauty and the Beast and some other film no one has ever heard of called “Lion King” 😉. So you could say that it has a lot to live up to being sandwiched between two behemoths of nostalgia culture. It would be easy for a film to be lost to a forgotten corner of your mind in order to make space for talking lions and yellow dresses. It would be easy, only if that film wasn’t Aladdin.

This is a beautifully crafted story about owning who you are and making yourself be the you-est you could ever be. It’s a film that even being 25 years old still holds up remarkably well, and is both thoroughly entertaining and mentally engaging. This is all do to its suberb cast of voice actors and breathtaking animation.

One kinda off-the-wall element that I think was handled exceptionally well was the concept of temperature. As weird as an observation it might be, I think it’s something the animators had set in thier minds to make apparent. The warm reds and bright oranges of the day fade into dark blues and purples to make the dessert feel like an actual place with changing temperature. It’s not something you focus on while you watch but it’s something that’s on the back burner of your mind that you genuinely feel. It’s just brilliant.

You can’t have an Aladdin review without talking about that legendary Robin William performance. It’s the perfect marriage between animator and voice actor. It all flows so incredibly well together in one charmly beautiful visual tango. A tango that also makes fart jokes. Williams is the purest form of fluid entertainment. He makes the Genie a marvel to behold and had me genuinely feeling happy.

Overall this movie is absolutely transcendent. All of its moving parts still hold up after all the years of nostalgia taking its toll. It’s a beautiful art piece with all its outstanding musical numbers and fart jokes.