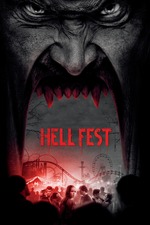 “Don’t worry about Gavin, he is probably pooping”
“Ew, I did not need that mental image.”

Hell Fest was genuinely frustrating. I didn’t go in with any high expectations or high hopes of this being suberb. I just wanted it to be fun, and dumb. But it was neither of those things, it was just frustratingly boring.

The acting is never a major concern with these slasher movies, but even so it was bad here. The characters were mostly just annoying, and this led you to have no emotions toward them at all.  You don’t end up caring what happens to any of them in the least, and they end up being as charismatic as the fake zombies on the ride.

By far the worst part of this movie was the pacing. Holy smokes were those scenes drawn out. I’m all for slow burn, especially with horror. But this was not even remotely that. Just when I thought a scene would get intense, the camera decided to focus on another prop for an unearthly amount of time. Or when there was an obvious death scene coming (and boy were they obvious) you wanted them to just “Do it already”.

The one thing that I thought was pretty good, was the sound design. It held up its end of the bargain, and created some atmosphere. Especially in the scenes with the mazes, they used sound to fill the theater and make it seem like you were right there in the room next to them.

This movie had its potential to be a fun slasher rollercoster ride, but it definitely squandered its opportunity. Somewhere along the way it seems they lost the drive to make this movie an enjoyable time and felt like they just wanted to get it done. It’s a shame because the idea of a slasher movie set in a horror-amusement park is a good one.