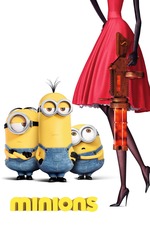 Despite how you view my rating, I’m quite surprised how much it didn’t annoy me because this is indeed completely pointless and simply mindless but again, I’m thoroughly pleased that this film wasn’t as awful as I thought it was going to be.

I still have a soft spot for the cute minions even though I feel this film should’ve never been made but here I was, watching it with my daughter with a huge smile on her face as this film doesn’t know when to stop. The pacing is insane, there is literally no slowing down, no heartfelt moments, no heartwarming messages to chat about after the film is over, did I say mindless? I meant heartless. There’s just no heart. There’s a mind here but it’s all jacked up on Minion Soda. Minion Soda because I’m more than sure this film exists for the sole reason of money and who’s to blame them? Our kids love it and guess what, I sorta liked seeing these cute little boogers roaming around London in the 1960’s while they imitate the Beatles Abby Road album cover but being balls to wall doesn’t get far with me. As there is literally no real meaning to this film but hey, my daughter and I had some genuine laughs and smiles together.