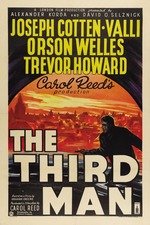 An American writer travels to Vienna to visit a friend, only to find out he has died from a freak accident which he believes was a murder. He decides to investigate the accident that eventually leads him into one of the most burdensome decisions he’ll have to face in his lifetime.

Simply bizarre but beautiful. I did not expect to enjoy this highly critically acclaimed film that is filled with unnecessary amount of oblique angle shots, that odd happy-go-lucky instrumental theme that doesn’t gel with the tone of the film, Orson Welles’s finally giving me a odd but charming and charismatic performance that feels more like a cameo, the awkwardness of Joseph Cotten’s character getting denied multiple of times by Alida Valli’s character but in so many ways all that weirdness is what made this so special for me because this doesn’t feel like your run-of-the-mill film noir, it’s different and it’s fun. As for the cast; no other film besides “Casablanca” has a cast that is this full with personality. Each character (even the small ones) are interesting and helps the plot move with ease. Speaking of the plot (without spoilers), the story was not only fun but stirring. I felt for Cotten’s character and the decision he had to face, left me wondering how far my loyalty can go for my best friend. I also did not see that twist coming.

Listen folks, this is obviously a fan favorite for good reason. The cinematography is gorgeous, the performances are wonderful, the story is original, the dialogue is exceptional, I definitely recommend this rare and magical film noir that is in the ranks with “Casablanca.”

The Devil All the Time