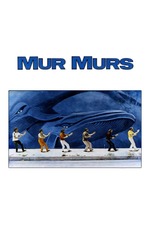 Using the images of one visual medium - film - Agnès Varda creates a lively optical homage to another - murals.

With a French title, “Mur Murs,” which is a pun translating to ‘whispering walls,’ Varda captures an unspoken-of history that is hidden in plain view.

That history is of chicanos, blacks, Indians, Asians, and every other ethnicity that makes up the multicolored palate of Los Angeles. While their stories might not appear in school syllabi, they are depicted in vibrant paintings that live on streets — neighbors to their subjects, and creators.

Varda, on her second Los Angeles sojourn - this time, living in Venice Beach - had originally traveled back to California to film a documentary about a man shot and killed by city police. That project never came to fruition, so Varda made “Mur Murs” instead.

The director’s definition of a mural is given, loosely, in the piece, “Anything decorated to express ideas feelings or is a mural.” As one of the film’s subjects explains, “Mural means I exist and I sign what’s mine.”

Varda frames the artists of the murals, and their subjects, as emerging from and existing within their work. They attain a level of spiritual transcendentalism - able to meld themselves into and out of their art at will. Since history will not write down their stories, they create their own myths, out of paint and stone - and leave their records where all can see.