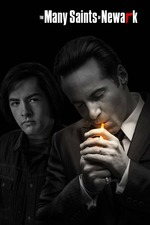 America never asked for the violence done onto its soul by men.

Neither did the women of David Chase’s “The Sopranos.”

These wives, daughters, and sisters were always the true axis of the show. It was a trajectory repeated by successor prestige shows “Breaking Bad” and Mad Men.” Masculinity might have been powering the engine of destruction, but it was the likes of Carmella, Skylar, and Peggy who gave the narratives momentum.

“Sopranos’” true tragedy was not the downfall of its titular family, but as it reflected in America as a whole.

Much like; say, Janice or Adrianna, America didn’t choose this life. It just got strapped along for the ride.

As an intergenerational epic, “Sopranos” benefited from its then still-novel multi year format of storytelling. “Many Saints of Newark,” clocking in just under two hours, instead is a fragment of a memory. It’s one that recurs in nightmares; still yanking its prey through a dark void upon awaking.

It’s popular of late to explore in films and television to explore the broad theme of trauma. Chase is a bard of one of its more poetic versions; how that trauma reverberates through place.

Here, that place - and void - of inescapability from nightmare, is 60s/70s Newark, New Jersey. Lacking bounty, in only absence, men ricochet around the emptiness with violent trashing.

Of course, as in “Sopranos” itself, these men are absolutely negligent of others - the women - who occupy that same space.

So, it is up to these “mob wives,” “goomahs,” and “molls” to live in the ravaged space that remains from this sadistic cruelty.

They are the ones that must make America.