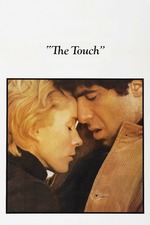 Like being seduced in a different language by someone who seems like their heart is anywhere, and with anyone else, “The Touch” is Bergman at his most artistically and sexually vacant.

“Touch” is remarkable for its casting of Elliott Gould, the first non-Scandinavian actor in a leading role within a Bergman picture. While Gould’s sweaty sensuality would seem to make him an idea pick for an emotional Bergman Ménage à trois, he ends up feeling like a square third wheel.

Bergman’s sexuality was at its sharpest when it was at its most raw expression of physicality. Whether this came in the form of uninhibited pleasure as in “Smiles of a Summer Night,” or corporeal horror as in “Persona,” mattered little to Bergman’s overall fluency in the concept.

So, it becomes absolutely baffling that Bergman would choose to make a film outside his native language, with three characters who simply will not stop talking and just screw already.

It’s almost as if they are - themselves - aware that there is nothing between them… except for empty words and air.

Working outside his mother tongue leaves Bergman’s command of social and verbal tension as numb as if it was on Novocain. “Touch” would likely have been more successful even if its sad sack seductions had been left in silence, rather than bumping with uneven virgin-level fumbling between Swedish and English.

To make sure my point isn’t lost in translation, what I mean is: less talking. More f***ing.