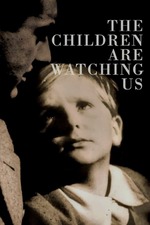 The Children Are Watching Us

Out of all the movies shot from a child's perspective, only a select few of them get it right. De Sica's attempt at this notion was nothing short of utter success. Taking the complex ideas of trust, unconditional love, social mores and adultery and seeing them be understood from the point of view of a child is something far too powerful to keep emotions at bay. Kids are a lot smarter than people will take them for, and this Italian drama knows this better than any other film in existence. 2013's "What Maisie Knew" being a very close second to that claim. At 1944, nearly a full 15 years before the French New Wave came to fruition, Vittorio De Sica's film was so ahead of its time that the director knew he could not have made this film(with its then very dark script)any where else than in his home country, far from the straitlaced traditions of Hollywood.

Although the journey this short feature takes you on is amazing on its own, nothing... I repeat, NOTHING can prepare one for the complete beauty and perfection of the film's ending scene. Those without a heart may retain a pair of dry cheeks thereafter.

The Spork liked these reviews

The Spork is using Letterboxd to share film reviews and lists with friends. Join here.