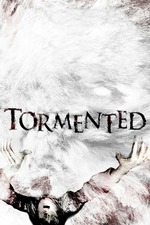 Tormented is probably best known as a minimal film from the director behind the Ju-On/The Grudge films. But I would argue it's better than those, even though viewer ratings indicate otherwise.

A mute woman working as a librarian at her old school keeps an eye on her younger brother, who is a student there. She considers him misunderstood—hated by the other students for the mercy killing of an injured rabbit. However, when a stuffed rabbit comes into his possession, weird things start happening around their house and the rabbit keeps pulling him into another world.

Tormented's strengths are such that talking about some of the key strengths are a pretty big spoiler. It riffs major themes of grief and being incapable of dealing with the past. The other world reflects those, kaleidoscoping through several key events that form the spine of the trauma. At first those locations are used merely as scare vessels, but as the film fills in the story, we start to see these events play out.

Highly influenced by the original The Little Mermaid fairy tale, which is referenced at multiple points in Tormented, we see strong parallels between our mute protagonist and the mermaid who gives up her voice to become human. Here, however, the exchange is psychological in nature. It's a nice parallel (given extra punchiness with her father's job of illustrating a Little Mermaid pop-up book, which has some glorious shots), although veers from the expected Little Mermaid ending.

The horror imagery is strong. One alarming sequence in particular features the bunny—represented as a large bunny suit—pulling the younger brother into the other world through the bed he's sharing with our protagonist. The boy is spit into the world through a seam in the bunny suit, while the still-sleeping sister is pulled out halfway, and the bunny walks around like that, patting her head. It's creepy AF.

The biggest negative, really, is some unfathomably bad blood effects. For a film made in 2011, you'd think they could do decent blood. But this is never properly colored and, at times, is an obvious digital effect that might have been passable in the early 90s, not twenty years later.

But I can deal with bad blood effects. Tormented is a surprisingly textured horror film that cycles around family relationships and dynamics.