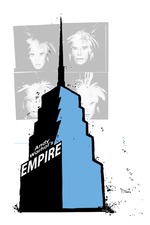 I just finished through watching ("watching") all of Empire in one sitting. Selected notes:

1m It's really overexposed. I can see the outline of the Empire State Building and the peaks of a few other towers are faintly visible. Otherwise it's hard to make anything out.

18m Much easier to make out the building now. I can see all the setbacks going up it. They're shooting from an odd angle that makes the right side of the building look like a narrow shadow, almost the way some of Warhol's silkscreens look when they get printed in roughly the same location.

26m The sun's setting. You can see different levels of light along the skyline, and darkness is beginning to inch up the Empire State Building.

28m A light just went on, on top of a tower just next to the building.

41m The lights came on! It's still a bit light out so you can see the silhouette of the Empire State Building against the sky.

47m Got some cool flaring on the film. The sunlight is basically gone at this point, and the only parts that are illuminated are the top of the building and that one light from the tower nearby.

1h That light on the left side just started blinking for a little bit.

1h36m Reel change! The building shifted up as the flare-out happened at the end of the reel.

1h52m long off for light on tower to the left

2h1m Well it looks like the lights have disappeared from the skyline. It's just the Empire State Building and one lone tower to the left of it.

2h5m So obviously a large part of Warhol's work involves the interaction between the medium and the pro-filmic elements. For his silkscreens, it'll be that liminal space between a face and the halftone patterns or his application of ink. So far in Empire, it's the film grain and light leaks. Now, the flaring is so heavy I can't actually tell if there's been a reel change. It did make some of the lights on the other buildings visible for a brief moment though.

2h15m I think I finally figured out what's going on with that light. It turned off again but then flashed ten times before coming back on. It must be 10:00 now.

2h53m Even though it's been night for some time now, the pitch black sky seems even more pitch black than it was an hour ago. Most of the grainy patterns of light have gone away, and it's just a singular etching of the lights on the Empire State Building and a pinhole of light.

3h5m That light on the left went out again. The one before it was at 163m, which at the original 24fps would be a 15m gap between each one. So I'm guessing it's marking the quarter hours.

3h14m Some flaring on the side of the right side of the image. And then I saw a reflection! Just a shoulder (probably Warhol's) and the outline of the windows in the building where they were filming.

3h52m Oh my god a couple came in and sat right behind me and now they're really going at it why are they doing this.

4h23m Hahahahaha, it kinda looks like the spire is a rocket ship and the two layers of lights below are the steam coming out the back.

4h50m Just saw what looked like another reel end, followed by the reflection of someone walking from right to left. Kind of lanky, I'm guessing Warhol again.

5h23m The image changes moment to moment, but everything looks indistinguishable from how it looked two hours ago. I'm putting on John Cale and Terry Riley's "Ides of March" as a soundtrack.

5h36m Tallest in the world and the Empire State Building is getting upstaged by a clock. Fucking owned.

5h39m An actual person! There was a brief pulse of light and then a glimpse of what looked like someone looking through the window, facing away from the camera. Too fast and too blurry to make out who it was.

5h46m 1am! A little over two hours to go. Nobody would know if I stopped now and wrote some snarky comments for the rest of it. (I would know.)

6h30m I guess they must have been playing with the exposure just now because the image was getting bright for a moment. Weird that that's the first time it's looked like that. Normally the entire image just fades to white.

6h52m Oh no oh no oh no. The lights went out. I see two or three tiny, dim lights on the tower but that's it.

6h53m Are they just staying like that? There's still over an hour to go. Please come back.

6h56m I might as well be watching ★ at this point.

6h59m I'm sitting here watching a fixed point of light on the screen. I'm starting to suspect I've been had.

7h11m The light hasn't come back yet so I'm just looking at a dark screen. Oh, now it's back.

7h17m Another reflection! I don't know if I've ever been so pleased to see some flaring, but then you can see the reflection of someone in a white shirt, along with the window behind them. It looked like this might have been Jonas Mekas based on the haircut, and I think I saw another figure on the right, which would then be Warhol. Some more flaring after that, which is like the only remaining thrill at this point. The objects being filmed are unlit, and everything's dark.

7h38m Did they already know the lights would be off at this point? They must have, it's not exactly inconspicuous.

7h50m There are three lights at the top now, and the top one is blinking. Those weren't there before.

8h2m Almost there. All is darkness.

8h5m Okay, this has been fun and now I gotta go find a bathroom.