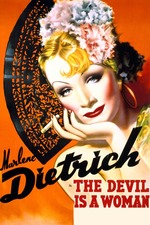 A sample page from the screenplay of The Devil Is a Woman:

Late at night, fog fills the air, making it difficult to see. A group of willow trees are outside a house, their leaves dangling over a house.

A heavy rain pours down onto the house, water running off the roof and falling in front of the window. A mysterious figure is masked by the slats of the window.

Through the window, a party is in full swing during Carnival. A bunch of balloons fill the air, as a young man (name unimportant, who cares about the men in this film) tries to make out the figure behind them. He desperately pops the balloons, but streamers obscure his view. Partygoers toss confetti which hangs in the air.

The figure stands behind a gate, its bars casting arabesque shadows on her. She hides behind a sheer curtain which she decides to pull back.

The figure holds a huge parasol, but lowers it to reveal she is Marlene Dietrich. She plays with a shawl, hiding behind it until she finally decides to wrap it around her shoulders. A fan covers her face, and she seductively peeks out from behind it.

A fucking 6-foot tall hat sits on Marlene Dietrich's head, with fringe reaching down to her goddamn eyebrows. After pushing the fringe away, she lifts up the veil she is also wearing. A large cluster, or really a small shrub, of flowers is tucked into Marlene Dietrich's hair, covering the side of her face. She turns to the other side and removes her sheer eye mask.