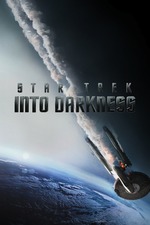 I had remembered hating this, but upon rewatch I was like "this is really fun!"
Then with each scene it just got stupider and more aggravating and it all came flooding back.

This is kind of weird because it's a really excitingly directed movie with a great cast and beautiful production design. Everything technically is fantastic, but it's script and priorities are entirely in the wrong place.
This is an exhausting, nonsensical revenge story which features some of the worst pandering and fan service I've ever seen. Upon reflection, it makes Abrams' Rise of Skywalker that much more explicable.

The opening scene of this ends with a super fun idea: Kirk and crew have broken the Prime Directive and now a primitive, neanderthal-like species have seen an incomprehensible, intergalactic spaceship. This blows their minds and we seemingly witness the nascent stages of a new, Enterprise based religion.

What a cool thing for them to have to reckon with - a potential story whereby the Enterprise are atoning for this error and trying to right the course of history for this civilization where they unwittingly made themselves messianic.

Instead, it's 2 hours of unbearable Cumberbatching which ends in the hilarious scene of Spock just going full ham - beating the ever-loving fuck out of him with his logical fists.