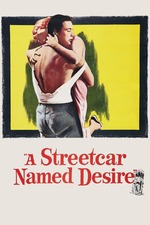 I had forgotten how complex this film was. I saw it some 30 years ago and did not remember much from it. When watching it now I felt like I was left with more questions than answers.

What I did get from the film is that it is about (among many things) the crashes of desires. Stella wants to please her husband and sister. Stanley wants to have respect and enjoy his life with his wife. Blanche wants to live in her fantasy world, free from her past and under the protection of her sister. These desires crash with such furiosity that no one is going to get unharmed from it. Such is life. We may believe we have full control over our life but sometimes the wrong people will enter our life at the wrong time and no matter what you so, you will get hurt.

It is hard to figure out if we are supposed to side with Stella, Blanche, Stanley or Mitch. They are all flawed people but they all have their own reasons and they are all valid reasons. There are no villains here. There are just people with different desires which do not run in the same direction. We are watching an unavoidable collision.

We do get to know that Blanche's husband was homosexual and committed suicide because of it. What is not clear to me is if Blanche was having sex with so many men because of that or because she was selling herself to keep the house or if she just used sex to gain recognition, feel young and wanted. Or maybe she was just a woman of big sexual needs.

Stella says to Stanley that Blanche likes to be told that she is beautiful and young so that supports the theory that Blanche is just very vain and that is in fact her big character flaw. Her vanity digs her grave.

Blanche vanity brings me to another theme of the play/film. One can see Blanche as a symbol for the old declining south and Stanley as a symbol for the new America, the buzzing cities and new morals where you are not judged by inheritance or social standard but rather by what you achieve. The decline of the south is do to its vanity and not wanting to modernise.

Kazan directed the first production of the play on Broadway so he knew the piece well. He used much of the same cast (Marlon Brando, Kim Hunter, and Karl Malden) with the exception of Vivien Leigh as Blanche, but she had appeared in the London theatre production so she knew the role well.

What is amazing is that Kazan manages to make this piece cinematic. Often when actors and directors have made a play together they will have hard time switching between the mediums. No such problem here! Just look at how Kazan uses light in the film, light that rips the screen like huge wounds. One of the best example of cinematic language is in the end (SPOILERS) just before Stanley rapes Blanche. He takes the broken bottle away from her and forces himself on her and we see the mirror (which reflects her face) break. What a powerful symbol of a breaking of a person's psyche, a symbol that would only work on film.

All the main actors (4 of them) got Oscar nominations but Marlon Brando was the only one who did not get an Oscar. It is hard to understand today how that could happen. He owns the film. Yes Humphrey Bogart was good in The African Queen but what Brando did here is way beyond anything Bogart did, or could do (with full respect for Bogart, whom I love).

A Tree Grows in Brooklyn