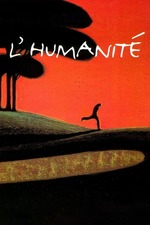 Another masterpiece from Bruno Durmont. How does he do it? The man is a gift from God.

Humanity is about the investigation of a rape and murder of a 11 year old girl. A child like and ultra introvert police detective Pharaon De Winter investigates the crime. He is so full of empathy that he can't get over the fact that someone could do something like this. The film ends up being more of an investigation of Pharaon than the murder and ends with an interesting and powerful twist. Like all of Dumont's films there is more to them than meets the eye.

The rest of the review is SPOILERS. Joseph admits to the crime (and it is logical, given he drove the bus, he has the temperament and he is not willing to cooperate, like he is afraid of something) but at the end we see Pharaon De Winter in handcuffs.

Now, there are 3 ways to read this IMO.

1) Pharaon did it and was just imagining the confessions of Joseph. I'm not really buying that. His reaction to cruelty suggests to me that he is not capable of something like this.

2) Joseph did it but Pharaon took the blame. I'm not buying that either since the police has DNA and it would prove him innocent.

3) Joseph did it but Pharaon's empathy is so strong that he feels like he is guilty. Pharaon is like an angel. He feels for everything, the flowers, animals, even the killer at the end. There is also a hint of this in the film when Pharaon levitates, as seen at time: 2.02.18. The film is really dealing with how someone with too much empathy would function in this world, someone who is (almost?) an angel. The title is also a good hint.