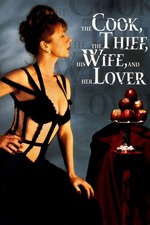 The Cook, the Thief, His Wife & Her Lover

I just saw The Cook the Thief His Wife & Her Lover again or as I would call it, The Church, The Devil, Mankind and Jesus Christ.

There are probably many ways to look at and read The Cook the Thief His Wife & Her Lover but one of the most obvious one has to be a religious interpretation.

Through out the film a young boy with blond hair, who looks like a Cherub, sings verses from Psalm 51, where sins are admitted and regretted and God is asked to wash them away, so everything will be white as snow. While the boy sings this he washes dishes and his voice is so high that it sounds like something otherworldly, like music from heaven. The boy sings this again and again, like a constant plea for help and forgiveness.

Now the world where this film takes place needs some washing and cleaning. It is a filthy world, made even more filthy because it is run by a gangster (The Thief) who has no appreciation for beauty and treats people like trash. The film starts with him smearing shit on a man and peeing on him. The man is later washed clean (as an answer to Psalm 51) by The Cook.

Later on The Wife and Her Lover are forced to go into a truck full of rotten meat and then later washed by The Cook. After this they walk around naked, like Adam and Eve in Eden, innocent and unashamed.

Now let's look at these 4 main players and how I see them:

The Thief is Satan. His name is Spica which is also the name of one of the brightest star in the galaxy. Lucifer means "the shining one", or "morning star", or "light-bringing". The Thief is the oppressor of this world, the corrupter, the enemy. He hangs around The Cook, because he is the only one who puts up with him and has some control over him.

The Cook can be seen as the Church or the priests in the Church. It is the church that serves the Eucharist. the bread and wine (body and blood of Christ). They are therefore some kind of a restaurant. Or maybe better to say that a restaurant is a good symbol for the Church, and the cook as the priest. The Cook is very important in the end. Also remember, this is where the young boy sings.

The Lover can be seen as Jesus Christ (The Song of Songs, one of the books of the Old Testament, is about two lovers and has been read by many as an allegory of Jesus and mankind). The name of the lover is Michael, which means "Who is like God" and the thief is very upset because he believes he is a Jew. The lover brings beauty into this world, pure love and appreciation of what is cultural.

SPOILERS. Later he is killed by The Thief and left in a crucifixion position. The Wife later on gets The Cook to cook The Lover who is going to be served at the restaurant (the Eucharist again). The wife even says to the Thief: " "No it's not God, it's Michael [Like God]." The film ends with everyone standing in front of the Lover (cooked) like before an altar in a church. END OF SPOILERS.

The Wife. She is us, humankind. Her name is Georgina which means a farmer, but humans became farmers when they were cast out of Eden (one of the punishments was that they should toil and work the earth). She is oppressed by The Thief (the devil).

SPOILERS The Lover sacrifices himself and dies for The Wife, Georgina, and it is because of this sacrifice that the world is finally washed clean as the cherub has asked for through out the film by reciting Psalm 51. END OF SPOILERS.

That's at least how I read this film :)