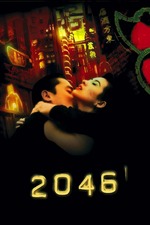 I don't know if this was the case, but I love the idea of Wong Kar-wai insisting on including the rendering of 2046 (the novel) at the beginning of this. This guy is responsible for some of the most compelling visuals in all of cinema and was still like, "You know what this needs? A train that looks like it's from a CD ROM we microwaved."

This is the weakest of the trilogy for me, but it still contains interesting ideas and, of course, stunning cinematography. Of all the Wong Kar-wai movies I've seen, the pitfalls of his writing style come across the most here. It feels disjointed as it goes, some stories seemingly only half-realized, and ends feeling slipshod and largely unsatisfying. The trilogy glides on mood, which is crucial in this entry, but it's not enough to save it from the disarray.

- Tony Leung looking that good with half a mustache is tough.

- s/o to a streaming service called Academic Video Online (and the school where I work) for having this. The logo in the top left corner the whole time was definitely not distracting.

- I understand Chow's trajectory after the events of ITMFL, but I didn't like his character as much here. The interesting thing about these movies, as pointed out by others, is that they ask you to empathize with the characters rather than connect with them, but I guess I just had a harder time with that in this one than with its predecessor.