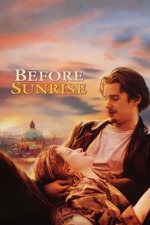 "Isn't everything we do in life a way to be loved a little more?"

Sweet, light and charming to the hilt, Before Sunrise relies on perfect chemistry between its two leads, a gorgeous backdrop city and sensitive, no-frills direction to tell a simple story of love, taking chances and spontaneous moments that make our lives worth living. Ethan Hawke and Julie Delpy are a delight in this movie and share a palpable connection throughout. They're our vessels for Richard Linklater to spin a wonderful tale of modern romance, devoid of sappy Hollywood moments, big swells of score and general emotional dictation. Instead, what we get is a film that feels completely real, from the heart and honest when it comes to portraying falling in love and the genesis of relationships.

I love the concept of the film being about just one long date during a 24-hour period. Within the confines of this tight timeframe, we see two people falling for each other through sharing conversations and experiences. The city of Vienna is featured beautifully and adds to the exotic, almost old-fashioned love story at the center. I could've easily seen Jesse and Celine walking down the Gothic streets of Vienna in a period piece and doing the same movie set in, say, the 18th century. The beautiful streets, gardens and architecture of Vienna provide the perfect backdrop to this story.

It's taken me too long to delve into the Before Trilogy (despite an ill-fated viewing of Before Midnight two years ago that didn't go so well since I viewed it out of context), and this was a fabulous start. I love Linklater's sensibility as sort of this chronicler of life in general. The Before Trilogy is his meditation on love and relationships and he starts it out with this tender film, which accurately captures some of the awkwardness, excitement, longing and effervescence of meeting someone new and slowly, deliberately falling in love with them. There are no flourishes or unnecessary pizzazz to his direction, just slow tracking shots and long takes of conversations and moments in time. And it's completely spellbinding at times. The scene in the restaurant where Jesse and Celine are improvising phone calls to their friends and talking about one another made me smile from ear to ear as its just a beautiful little slice of life that acts as the glue holding this film together.

While some of the dialogue feels a bit forced at times (including a kind of corny scene involving a street poet that seemed overly philosophical), Linklater and Kim Krizan's script is pretty tight for the most part. There are times where Linklater employs some eye-rolling psychology in the vein of another film of his, Waking Life, which I hated, so those parts I kind of tuned out. But the film had a way of bringing me right back to the endearing love story at its center, mostly because of the tender acting performances of Hawke and Delpy. By the end, I was rooting hard for this couple to make it. I think anyone in a committed relationship can find a little bit of themselves in the story of Jesse and Celine's chance meeting.